The tarred brick tower mill at Stow Hill situated on the west side of the coast road from Mundesley to Paston was built as a flour mill between 1825 and 1827 by James Gaze.

The land on which the mill was built had been acquired by Thomas Gaze (1), gentleman of Paston Hall from a John Taylor, yeoman, under an Indenture of  Ffeofment dated 28th January 1778 – a method of conveyance abolished in 1845.

Thomas Gaze died in 1805 and the land passed to his son, Thomas Gaze (2), and then to his son James. In 1827 James Gaze, “being desirous of making provision for his said son in order to advance and prefer him in the world” conveyed to his eldest son, Thomas Pleasants Gaze for the nominal consideration of ten shillings of lawful British money….

Along with the Lease and Release dated 12th and 13th October 1827 from which the above script is taken, a mortgage was prepared and taken out by Thomas Gaze for £900 to Mr. Christopher Shephard of Heigham, for the house, land and mill and also…

The house, mill and other outbuildings were to be insured against fire for at least £800. The mortgage was evidently to pay for the cost of the erection of the windmill, but it is worth noting from the first text above that son, Thomas must have been instrumental in the building of the mill itself, albeit with the consent of his father and at his initial expense. In the Lease, Thomas is described as a Miller of Paston.

On the 6th November 1828, one year later and with the mill now in operation, a further mortgage to Mr. Christopher Shephard was taken for £150 to pay for the building of a granary.

There had been another mill in Paston, which was demolished in 1840, when its material and equipment were sold piecemeal by auction. With the loss of this mill in Paston, it appears the local populace adopted the name of Paston Mill for Stow and it remained so for many years and continues to be rumoured. The owners, without conclusive proof of either, can only refer to Ordnance Survey maps on which it appears as ‘Stow”.

Thomas Gaze worked as the miller of Stow Mill for 45 years until his death in 1872.

The windmill and a steam mill which had been installed in the granary were offered for sale by auction:

To be sold by Auction by order of the Executors of Thomas Gaze deceased by Mr. Thomas Barcham on Thursday 3 July 1873 at the King’s Arms Hotel, North Walsham at 6 o’clock. Lot 1 A BRICK TOWER WINDMILL in Paston in capital repair driving two pairs of Stones, with Flour Mill, Jumper and all necessary tackle and gear. Also a STEAM MILL erected a few years since, driving two pairs of Stones with the five-horse power engine and apparatus thereto belonging. Also a comfortable Brick and Tile RESIDENCE with Granaries, Stable, Cart Lodge and Outhouses thereto belonging. FREEHOLD.

The Mill is now doing a flourishing business. Possession at Michaelmas next.

Apply to Mr.Wilkinson, Solicitor, North Walsham or the Auctioneer, Mundesley. 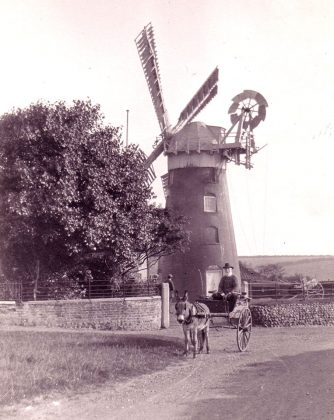 However, the property was not sold, and the business was carried on by the son of Thomas Gaze, William, who worked on behalf of himself and the co-executors until the estate was wound up in 1875 when the properties were conveyed to him. William continued milling at Stow until he died in 1906.

The property was then bought from William Gaze’s estate by Mrs. Mary Ann Harper on 15th December 1906 and her cousin, Thomas Livermore took a yearly tenancy of the mill in 1907.

Mrs. Harper died in January 1928 and left the mill to Mr.Livermore who worked it until 1930. Milling then came to an end at Stow Mill.

The property was then purchased by Mr. and Mrs. Bell who renovated and greatly enlarged the miller’s house (standing on the south side of the mill), whilst the mill, like others on the North Norfolk coast, had her machinery removed and was converted into an annex for extra living accommodation.

At this time, for some reason, a “bolter” from the mill was sent to the Science Museum by Rex Wailes, a windmill historian. Unfortunately, though it disintegrated from it’s infestation of woodworm.

Mrs.Bell and Rock outside mill 1933

By 1938 a new holiday camp had been built along the road opposite the mill, the first of its kind in Britain.

Mr. and Mrs. Bell, fearful that their peace and tranquillity had been spoilt forever, sold on to a certain Mr. Douglas Sydney Arundel McDougall, the flour producing magnate, who used it as a holiday home.

The property then passed to a Miss F. M. Noble but was again purchased in 1960 by a Northampton businessman, Mr. C. M. Newton. In 1961 the windmill was selected by the Norfolk County Council amongst others in the county “as worthy of financial assistance towards preservation”.

Four new sails and a skeleton fantail were fitted by Messrs. Thompsons, millwrights of Alford, and the remains of the 1930 kitchen sink unit and bath were removed. The mill was then opened to the Public for the first time.

In 1971 the mill was conveyed to Mr. Newton’s grandson, Mr. C. M. B. Newton who enlarged the old granary barn beside the mill and converted it to his home. With the help of admission fees at the door of the mill, he undertook its maintenance.

In 1977 the mill was leased to Norfolk County Council by Mr. Newton, for the nominal sum of one peppercorn per annum and further restoration work began. However, this lease was terminated on 1st December 1981.

It was Mike Newton’s hope to see the mill working again and it was he who organised replacement of the two Columbian pine stocks for galvanised steel; the second of which with the help of a fund-raising appeal in the local area.

In 1980 some repair work was carried out to the curb castings which enabled the cap to be turned for the first time in 50 years. In 1986, he installed an upright shaft with a wallower taken from Houghton Mill, and collected two pairs of millstones from Nedging Tye in Suffolk, plus a great spur wheel from Gooderstone Mill in Norfolk. However, these were never put into place. 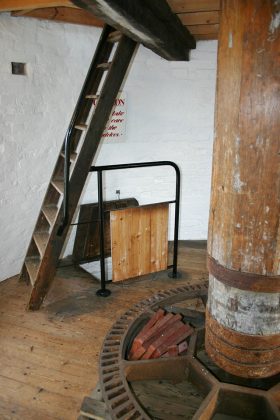 In January 1999 Stow Mill together with the adjacent cottage was sold to the present owners, Roger and Andrea Hough. With no experience whatsoever of windmills their first job was to ascertain the condition of the mill and its future.

They decided to try to restore the mill to working order again but decided it was unrealistic in cost wise. However continuous works have been undertaken on the ongoing refurbishment of the building itself.

In 2002 it was decided to transform the garage at the front of the cottage into a souvenir shop which successfully ran for 10 years whilst the windmill remained open to the public.

Unfortunately, due to the recession and falling demand from the nearby holiday camp which eventually closed, the owners shut the doors to the shop in 2013.

Conversion to a holiday home and restoration

The owners then began to research the possibility of converting the mill into a holiday let. From the start problems developed just from the audacity of such an idea but with determination and many considered discussions with architects, conservationists and town planners a design was eventually put forward for planning approval.

It was refused. A second application was also refused but eventually a design was submitted and proved successful. However, the owners considered the approved design unrefined and went their own way to resolve a solution that was acceptable. Fortunately, the owner Roger Hough had gained some architectural knowledge when he worked with his brother Clive who was a qualified architect, and this experience allowed him to develop a revised plan of his own which was accepted and approved at Planning. Building works started in 2016, the owner working as the project manager.

It was then, when a millwright, Paul Kemp, was asked to remove the machinery within the mill that an inspection of the top (dust) Floor and Cap was made and it was discovered the main weatherbeam on which the main windshaft rests to revolve, had been badly affected by rain water ingress to a point that it was deemed dangerous and unsafe. To undertake a proper repair to this problem it was immediately realised that the Sails and the whole Cap would have to be removed from the tower.

There was little option but to go ahead with a complete and thorough restoration. The professional advice from the millwright was that part of the problem was due to the extra weight of the galvanised steel stocks installed in the late 1970’s. Accordingly two 50’0” lengths of Douglas Fir were purchased to be shaped into new stocks, along with a huge 1 ton piece of oak to be shaped into a new weatherbeam. These were purchased and laid to ‘season’ in the front garden of the mill for 2 years. In the meantime and for extra safety reasons the Sails were removed from the Stocks which were left in place.

In July 2018 the first guests were welcomed into the newly converted mill while initial restoration work began away from site.

In April 2019, after a very successful 9 months of holiday lettings, the mill was again closed to visitors and serious restoration work began on site. The steel Stocks were removed and the Cap was lifted off from the tower by crane to rest on the grounds in front of the mill whilst a temporary roof was installed on the open tower.

Restoration work initially concentrated on the Fantail stage. The boarding at the front of the Cap was dismantled and opened to allow access to the rotted weatherbeam which was removed and the supporting front Shears were repaired. At the top of the tower with the Cap removed, an inspection was made of the Curb, on which the rollers carry the 10 ton load to revolve the Sails into wind.

It was discovered that most of the old metal sections were broken and consequently necessitated a new pattern being formed and new steel sections cast. After 12 months of concentrated attention and work the new and repaired Cap, complete with a new Weatherbeam, repaired upper curbs, new fantail and stage, was lifted back onto the replaced rollers and new cast curbs on the top rim of the tower. Finally, after a further month of shaping and painting the new Stocks, these, with the sails, were lifted back into position.

Since Stow Mill ceased milling in the early 1930’s the black tower landmark has stood silently and broken, repaired only to a cosmetic standard. Now it stands as proudly as it did when it worked to mill flour 100 years ago and is once again a ‘working windmill’ with a purpose. Hopefully it will now again earn its own income to maintain and continue its presence into the foreseeable future.